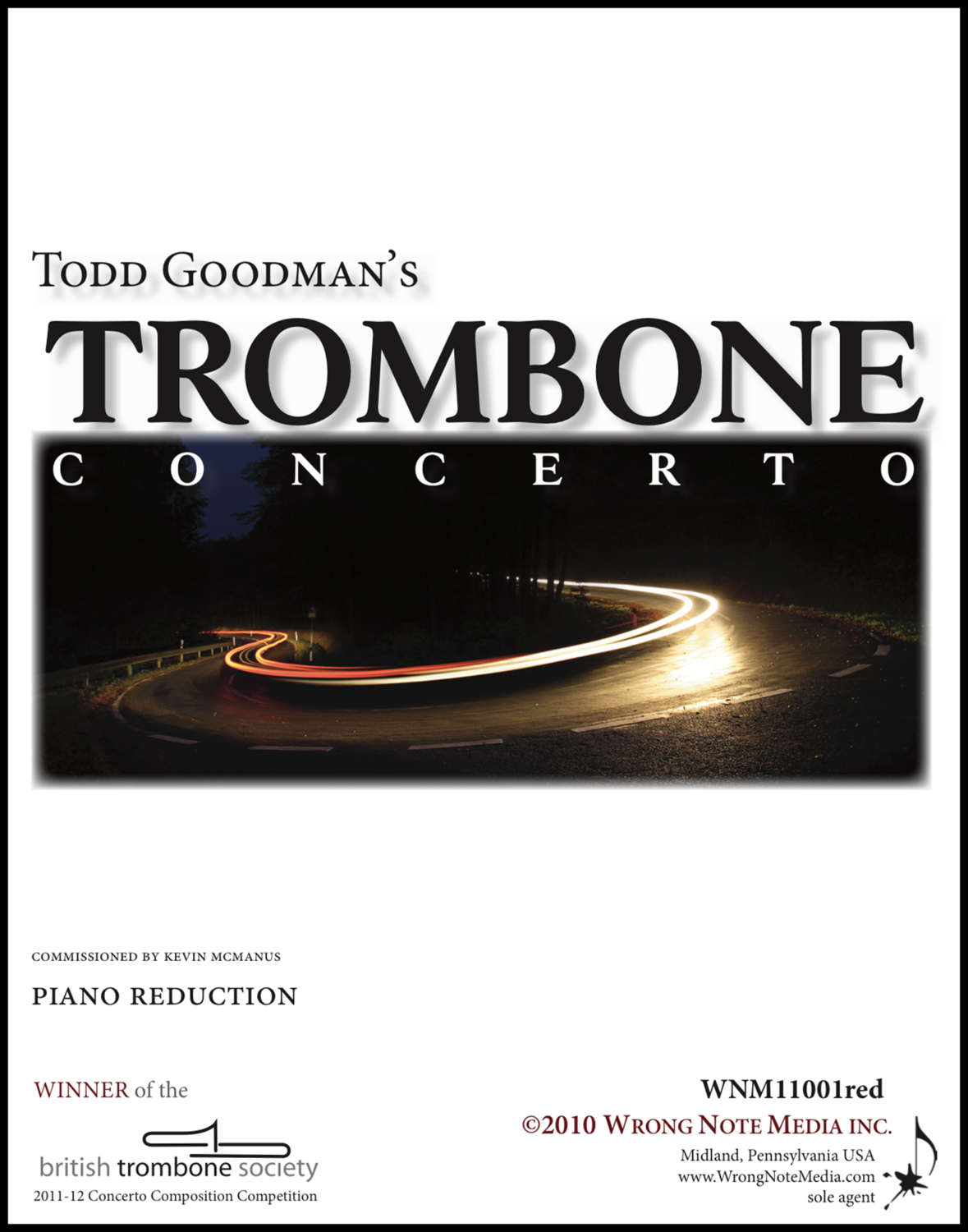 Piano reduction for Trombone Concerto [WNM11001]
Product ships with both saddle-stiched piano score and solo part, both 8.5x11.
Reduction by the composer.

"The marked characteristics of Todd Goodman’s ‘Trombone Concerto’, from excoriating forcefulness to the tenderest stroked nuance, is a remarkable display of musical dichotomy." - www.4barsrest.com, May 2019

Todd Goodman’s Trombone Concerto was written in 2010 for Kevin McManus and named winner of the 2011-12 British Trombone Society Concerto Composition Competition. Te work, in three movements, explores the wide range and the many beautiful aspects of the trombone and its timbre. e trombone, whose ancestor was the rst instrument to be allowed to perform in the Mass of the early church, has such a remarkable singing quality that it was my intent for this work to be an aria for the instrument. To contrast that however, it was also the brass family that o en led armies into battle, due to their erce and noble sound and powerful quality, so it was also my intent to showcase the trombone’s power, but yet also its tenderness and warmth. erefore each movement focuses on the juxtaposition of many very speci c qualities of the trombone, either through technique of the instrument, aesthetic elements of the style of the music, or compositional technique.

MOVEMENT ONE is the juxtaposition of interplay between two contrasting motives. e rst of which is a majestic aria and is sung by the trombone at the opening of the work. is melodic idea, which reoccurs numerous times throughout the entire piece, is supported by a progression of simple chordal motion in the accompaniment. As the aria closes, the second motive, which is a fast, energy- lled dance, develops between the soloist and the piano. roughout its evolution, the movement ebbs and changes within the context of each of these ideas--the aria becomes aggressive and the dance subtle.

MOVEMENT TWO is yet another juxtaposition between two contrasting elements--rhythm and pulse. Set in a very traditional ternary form (A-B-A), the elements of this movement that give it life are the lack of a constant pulse, combined with that of an almost heartbeat-like pulse. e opening section is a vibrant set of two chords and three descending parallel hs that repeat throughout the A sections, however written within constantly changing rhythmic values. As this gesture unfolds, the trombone provides a counter-melody; although the two ideas quickly mold into an organic unit. e middle part, or B section, of this movement is the total opposite of the opening and closing ideas, set on a strict pulse and providing for the soloist a heartbeat with which to sing another melodic aria. is pulse ends with a return to the opening arhythmic section.

MOVEMENT THREE (played attacca from the second) opens with a brilliant eruption of energy in the piano and is the last of the set of a juxtapositions. is movement is set around the development of three tonal centers simultaneously--the trombone, the right hand, and the lehand of the piano, all of which cross paths many times throughout the movement. However, unlike the other movements, this movement is mono-thematic and its development comes from the two distinct ways in which the piano’s opening gesture is changed. At the highly energetic close of the work, the piece’s opening rst movement aria is reintroduced and the piano and the trombone climb to the work’s end.

Listen to and watch the solo part of Peter Steiner's wonderful recording.

UNITED with Peter Steiner and His-,

LISTEN TO THE LAST MOVEMENT OF THE PIECE: