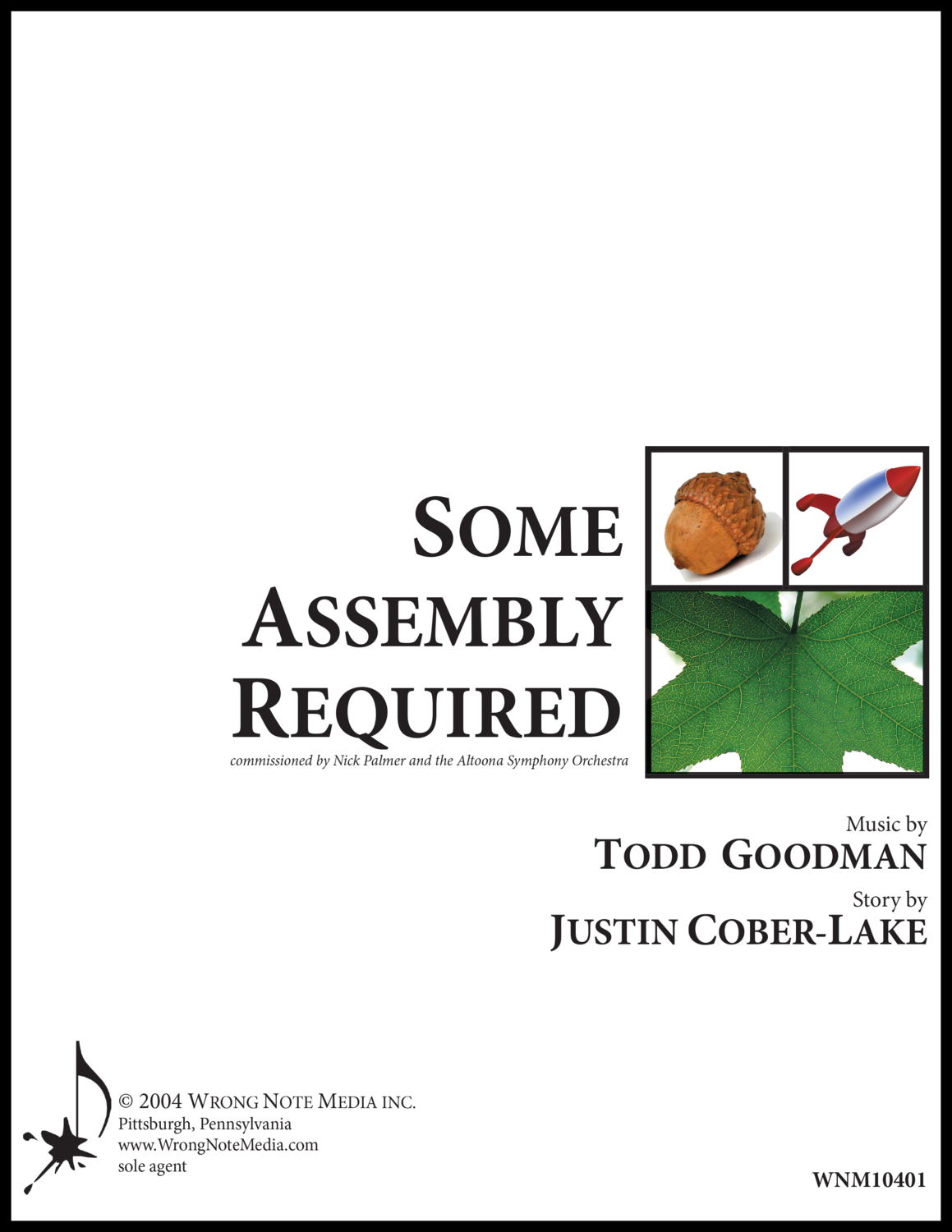 I have received great audience response from both adults (teachers) and children about 'Some Assembly Required.' They absolutely loved it! I have actually received mail from those who attended thanking us for including it on the concert. It is a perfect piece for an educational concert; extremely well written and accessible to youth.
- Lawrence Kopp, executive director Altoona Symphony Orchestra


'Some Assembly Required' is a great musical work for educational concerts! It is very effective, easy to rehearse and perform, has superb narration, and engages kids! It is a creative, interesting and, most of all, fun piece and story!
- Nicholas Palmer, music director Altoona Symphony Orchestra

Narration should be read/acted by a female, a girl child actor may be used as well.Props may include a model spaceship & acorns.Conductor will cue all entrances of the narrator.

I was trying to amuse myself but I wasn’t doing a very good job.I had just got this new toy, a model spaceship, but I couldn’t get it put together.Dad was out of town and Mom was trying to get some work done in her office and I wasn’t supposed to bother her.I can’t help it that I’m not big enough to put together the spaceship that they bought me.Parents should think of that stuff.Instead of it being fun, it was just sitting there taunting me, because I’m not big enough to use it.

So what am I supposed to do?I ask Mom to fix it up for me; she’s not doing anything but writing some stuff and listening to that stupid music of hers.

She says she’s busy, but I say she isn’t.I’ve got a problem here and I think she needs to deal with it.That’s what I told her, and that’s when Mom threw me out, like it’s my fault I’m bored or something.She told me to wear a jacket, but I wasn’t having any of that.If I was going to have to be outside, the least I could do was to not look like a doof.I thought I’d go for a bike ride, but then I remembered that Dad hadn’t ever put the tire back on after he fixed it.Six more years and I could drive; then I could do all sorts of stuff.No more putting together dumb toys and no more broken bicycles.Nothing but the open road for me.Six more years, though, so for now I’m stuck walking it.I feel just like my toy: some assembly required.

I decided to go up into the woods behind the house instead of walking down into town, like those curb dogs my brother’s always making fun of.He’s such a jerk.He acts like he didn’t use to have to walk every day, too.He’s funny, because just like me he’d rather walk, anyway, especially when it’s sunny.I decided it would be exciting to head off into the trees, to get out of here and have an adventure.

I hadn’t gone very far before I decided to start seeing how far I could throw acorns.My dad says I have a pretty good arm for a girl.I say he can shove it -- I can already throw better than him.

I started whipping those little things through the trees, trying to hit this old tree with a white mark on it.I couldn’t do it.Then I thought about trying to hit this squirrel’s nest I found, but I’m always worried there might be babies in it and I don’t want to hurt them.Birds are one thing, but I like squirrels, even if they do look like rats.

You know, birds are pretty cool, too, I guess.I saw this nature show once where a hawk was bothering these little birds, but some of the little birds started swooping at the hawk and fighting back.More and more little guys kept joining in until the big hawk got mad and flew away completely.On their own, they aren’t so tough, but when you pile up enough of those little guys together, they sure can be something.

I reached the edge of the woods, and picked up one last acorn.I looked straight up and there was this big oak tree.I could tell what it was because Mom taught me about the leaves.These little ones with the rounded things pointing out are oak leaves.It was pretty hard to believe that that tree came from an acorn like the one in my hand.I know it takes a long time, but it’s pretty fun to think about it.One time on a field trip, this ranger showed us a big stump and we could count the rings inside it to figure out how old the tree was.I forget, but it was pretty old.He also said you can tell what each year had been like based on how far apart the rings were.I threw my acorn down into some guy’s yard and then ran back home.Maybe some day his kids will have a big tree right in the middle of their place.

When I got to my own house, Mom was outside raking up the leaves.She hadn’t seen me, so I hid behind a tree until she had a pile made.When she finished it, I ran for all I could and smashed into it, waving my arms and rolling across the ground.I knew Mom wouldn’t be mad.She said, “You little booger,” and I went inside to get a drink.We always have lots of cider around this time of year.Then Mom came in a shoved a handful of leaves down the back of my shirt, right in the kitchen.I shook them out and left them on the floor.I thought Mom would pick them up, but she just smiled a poured a drink.She’s weird sometimes.

I didn’t have anything better to do, so I went back upstairs for my spaceship.Now that I had gone for a walk, it wasn’t bothering me so much any more.I got the directions out and read them carefully.It looked easy enough.You just take it one piece at a time, and slowly add them together until you start to get yourself something.After that, you can put the little decals on and you’re all set to go.It doesn’t look like it’s going to be so bad after all.I think if I just stay at it, I’ll have it done in no time.

I know what my Grandma would say if I told her this story: she’d say that I should have learned a lesson from it.I was complaining about being too little to do what I wanted, and then I learned that even little things (like acorns and birds) can do big things (like turn into oak trees or chase away hawks).I guess it’s just a matter of being patient, of waiting until all the pieces come together.

The acorn gets watered and the birds team up.I just need to grow a little bit, but that will happen soon enough.I can also take care of things now just by sticking at it, like with this spaceship, and by learning what I can.The package this ship came in says “Some Assembly Required.”I guess I can handle that.