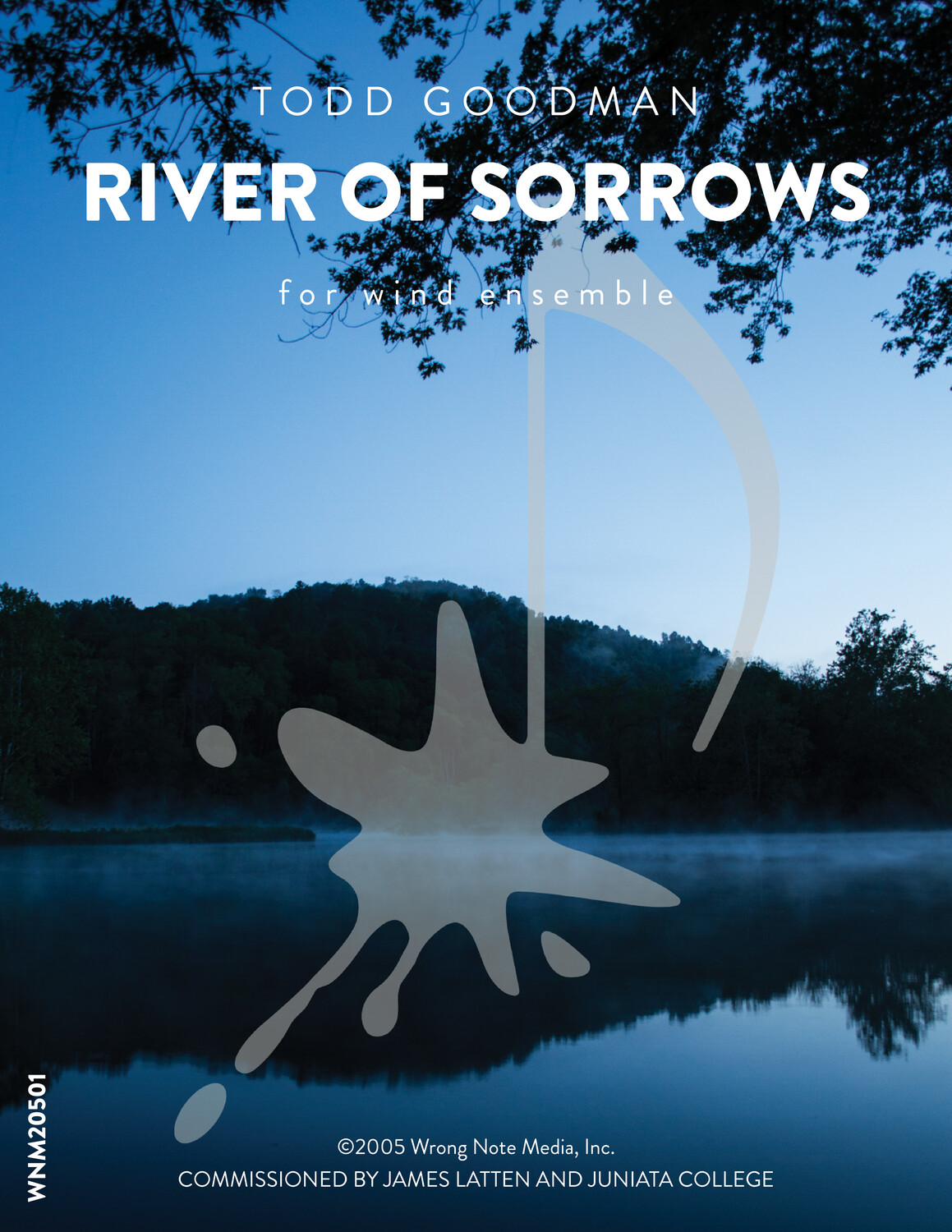 RIVER OF SORROWS by Todd Goodman

River of Sorrows
notes by the composer

River of Sorrows is my musical impression of the life and history of cultures built around the River. Its pastoral peacefulness, its power and source of life, and its mysterious grandeur has caused and still causes cultures to act recklessly, both towards the natural artery that sustains it but also to other humans who might need the river's resources.

A book titled Juniata: River of Sorrows by Dennis McIlnay inspired this piece. It explores not only the recreational and leisurely aspect of the Juniata River of central Pennsylvania, but the rich history of the Native and European inhabitants of this area. As this book provided the inspiration and historical background on one river, the Juniata, the work was written thousands of miles away near the Seine River in Paris, France, during the summer of 2005.

The piece opens with a figure heard throughout the work--a simple rhythm of an eighth and two sixteenth notes--which is passed around the ensemble while the main theme is developed in solo voices. This opening rhythm is heard relentlessly in the summer months during the nighttime hours in central Pennsylvania, performed flawlessly by the tree frogs that inhabit that area. The theme is developed through different ideas that are each separated by triumphant fanfares in the brass. The arch form of the work is separated by a march, simultaneously in the time signatures of 5/4 – 4/4 – 3/4. This march represents the walking purchase treaty of August 25, 1737, in which the British agreed with the Natives that each party could have the land "as far as a Man could walk in a day and half," but instead of walking, the British hired marathon runners to mark their territory, resulting in a very unfair resolution to the treaty. Just as the treaty ends in chaos, so does the march with each player rushing to finish first, the cacophony explodes into the reminder of the rivers peace and harmony that calms the violence. The work ends with music similarly to that of the beginning but quoting an extremely popular parlor song of 1844 Blue Juniata by M.D. Sullivan that was written about an Indian girl of Central Pennsylvania.

LISTEN TO THE PIECE