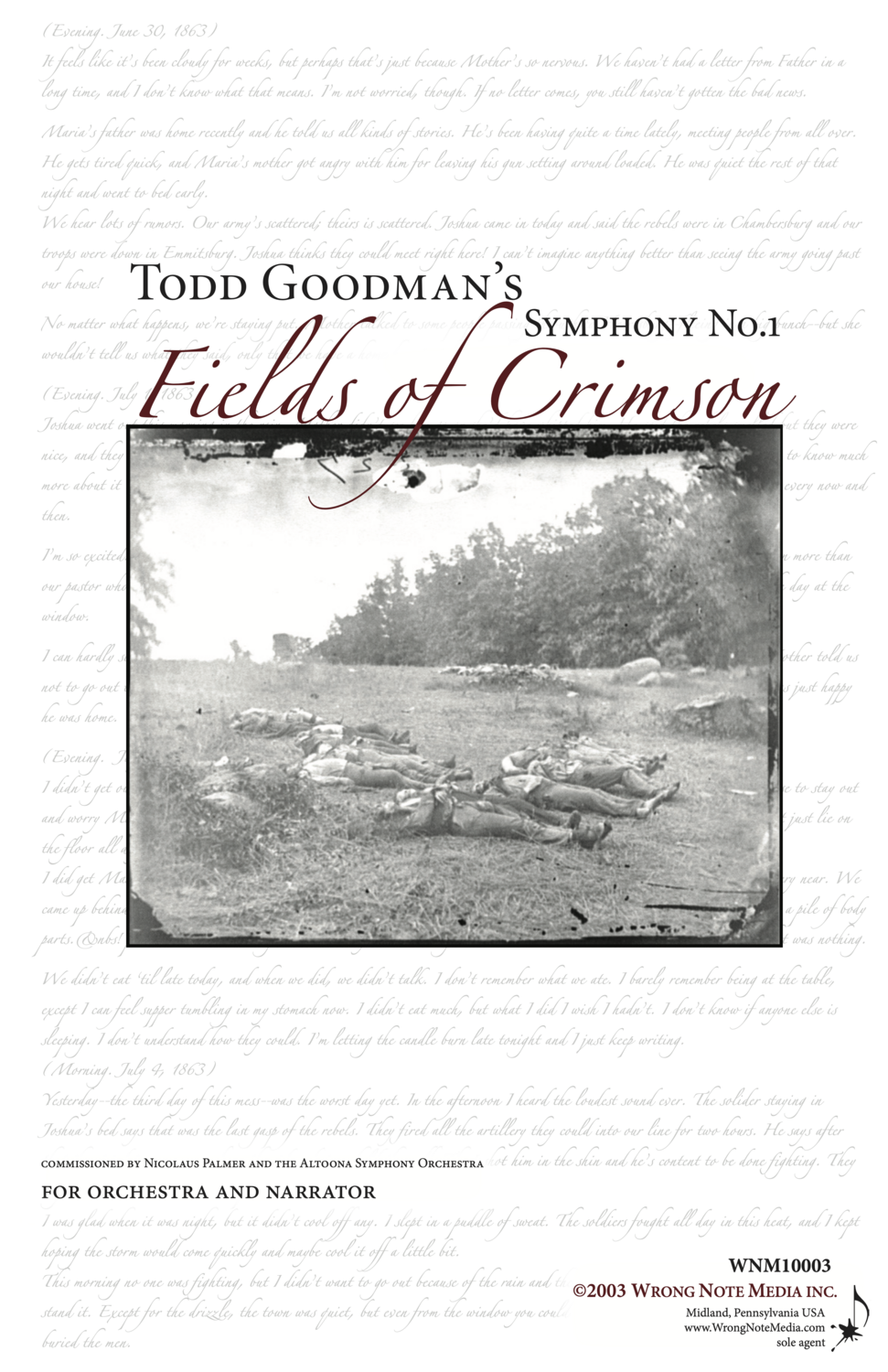 Symphony No. 1 "Fields of Crimson" - orchestra SCORE, by Todd Goodman

Symphony No. 1 “Fields of Crimson” [2003]
a dramatic retelling of the battle of Gettysburg
narration by Justin Cober-Lake

An historic performance for one of the country’s promising young composers!
Chris Frear, Bedford Gazette

Orchestras that have performed "Fields of Crimson" include:

Listen to the World Premiere recording of the Altoona Symphony Orchestra's performance of Symphony No. 1 "Fields of Crimson."

Available on this website, as well as other retailers, including streaming services and digital download companies Amazon.com, iTunes, CDBaby, etc.

Symphony No. 1 “Fields of Crimson”
notes by the composer

When I was a boy growing up in central Pennsylvania, the Civil War was an omnipresent theme. Although people didn’t speak much about it, the ruins of battlefields, historical markers, and monuments, just to name a few, were always its constant reminder. The older I got, the more I realized how intrugile these few years of history were to the molding of the foundation of America. When I finally visited these battlefields, the impression left on my mind was one of humble and noble awe. Lives were lost for freedom; freedom from tyranny, freedom of rights, and freedom for life. Symphony No. 1 “Fields of Crimson” is my rendition of this story; my realization and understanding of the necessary horrible evil of war… and my memorial.

A quiet day begins with a tranquil camp of Confederate troops by the side of the Potomac river in Maryland. As the morning progresses, the troops begin to awaken and the sun rises with a burst of pastoral energy. A rumor is heard throughout the camp and word of a large move north fills the air. Suddenly, the rumor is told true as a bugle rings out “The Assembly”. The troops quickly form ranks and the slow march north to Gettysburg progresses. When the troops stop for the night a sense of foreboding is in the air and the darkness comes with some unease.

As the day begins, an unsettled feeling surrounds the town of Gettysburg. It is very early in the morning and some soldiers are out searching for shoes. A random shot is heard echoing through the valley and the greatest battle of this war has begun. As more and more troops reach the area the small Union army is broken and forced through town and onto overlooking high ground, Cemetery and Culp’s Hills. The troops feel beaten but yet a drive still remains.

The morning is unusually calm, and driven. Union troop morale is unusually high given the prior days activities. With reinforcements arriving early this morning, both sides are now at full force. The south has continued success with Longstreet’s persistent attacks, yet with more Northern troops arriving later in the afternoon the Union center and left remain intact. Part of the Union right and Culp’s Hill fall to Ewell’s Confederate troops.

Something this morning is not right. There is an eerie and morbid reality that has fallen over the troops. Lee tries to break the Northern center with two of the largest attempts during the war. Lee orders a two hour artillery bombardment of the North which is succeeded by a charge of 12,000 Confederate troops. This charge (later named “Pickett’s Charge) caused the South to loose over 6,000 men in under an hour. This heavy loss of the South makes Lee retreat and head to Virginia.

As taps is heard echoing over the grounds, Lee is heard saying, “It was all my fault!”. A deep sorrow is felt in the town of Gettysburg. Even though its troops had won, so many people had lost their lives. Churches are filled with people thinking of the future, remembering and praying for those families who now need God the most.

The narration of this work, written by Justin Cober, is a fictional dairy of a young adolescent girl who lived in the town of Gettysburg during 1863. She is writing on the eve of each day and she keeps accounts of the soldiers, weather, and emotions during each battle. All relative information in this narration is historically accurate.

Save this product for later
Display prices in: USD
bottom of page