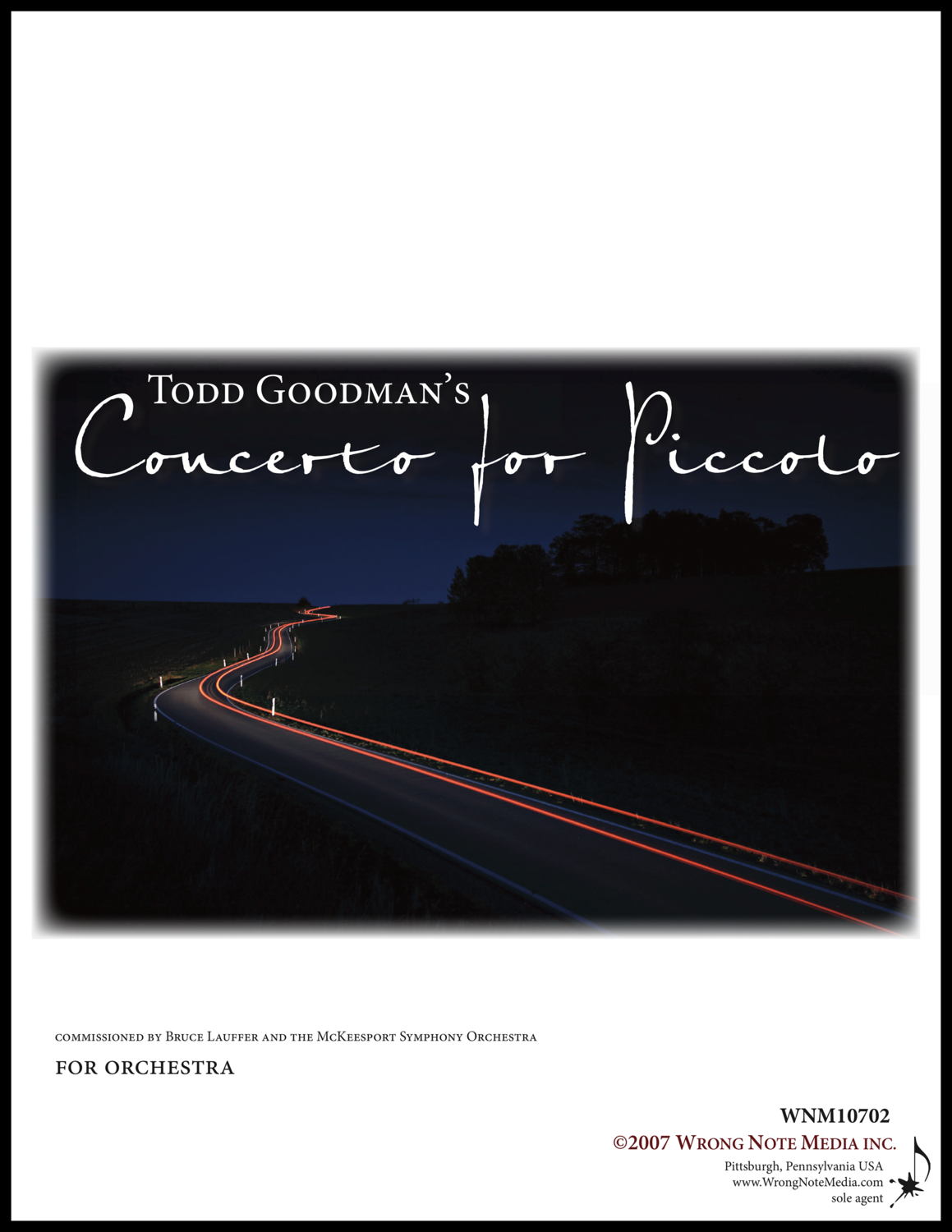 Concerto for Piccolo and Orchestra is a substantial three-movement work that was commissioned by Bruce Lauffer and the McKeesport Symphony Orchestra. The work was written especially for piccoloist Torin Olsen and was completed on April 15, 2007.

The first movement, Echos, was inspired by the composer’s work, Echos: prelude and dance for piccolo and piano which was commissioned by Torin Olsen for his performance in the piccolo performance competition of the 2006 National Flute Association convention. The work begins with a soft and angelic prelude that develops through both extreme ranges of the orchestra and the low, lush beautiful resonance of the piccolo. At the end of the prelude, a rhythmic dance starts to pulse in the time 17/16 while much of the other material stays in 3/4 or 4/4. As the many rhythms play juxtaposed with each other, small two beat fanfares interrupt the energy, bringing the focus back to a single pulse. A joyous dance incorporating the previous fanfares and an acrobatic piccolo line metered in 2/4, acts as the center of the work. As it winds down, reminiscent echoes of the prelude are heard as the music is unsure if it wants to fully recapitulate into the music of the beginning or continue to dance. It decides to do both, giving the opening material a dance like connotation. The title Echos relates to the Greek name given to melodic material in Byzantine music that is akin to the western medieval mode. The noun echos in Greek simply means “sound."

Echos: prelude and dance for piccolo and piano was the winner of the 2007 International Project Piccolo Rebirth composition competition.

The second movement, Theosis, is attacca (played without a pause) from the first. The movement is reflective yet eerie and was composed after the sudden death of one of the composer’s students. High soft harmonics shift colors in the upper strings while a bass drum gives a steady pulse. The piccolo introduces the main theme of the movement that then is transferred into the piano, harp, and pizzicato strings. As the theme develops it arrives at a large triumphant surge of energy, which introduces a beautiful lyric chorale for the soloist and strings. The rhythmic bouncy motive from the beginning slowly returns and the movement ends just like the beginning, reflective and eerie. Theosis is the call to man to become holy and seek union with God, beginning in this life and later consummated in the resurrection. The word theosis in Greek means divinization.

The third and final movement of this work, Ascension, is a fast aerobic workout for the piccoloist and the orchestra. The shifting rhythmic pulses and soloistic leaps create an exciting energy and eager sense of rise and flight. The motivic materials of the movement are simply major and minor seconds that morph and develop throughout the orchestra. As the work progresses, ideas from the piccolo are interrupted by ascending gestures in the orchestra, however the pulse and energy of the piece remain in the control of the soloist. The movement is settled by the harp and piano as they introduce more lyrical and song-like ideas. A chant in the middle of the work repeats a single line throughout the orchestra at different rhythmic levels of augmentation and diminution while the soloist comments over the blanket of sound. The chant builds tension and releases to a recapitulation of the opening music. Ascension in the Christian faith is the rising of Christ’s body to heaven. The work Ascension in Greek means rising.